What do you do when you are at a crossroads in life? Flip a coin, talk with friends and family?

Moriah Peters turned to prayer when she was faced with accepting a scholarship to Cal State-Fullerton to study law or charging forward with a music career filled with risk.

“It was a real tough decision. I worked so hard and studied so hard because I wanted to go to law school and be an entertainment lawyer,” said Peters, who held a 4.1 grade-point average at Don Antonio Lugo High School in Chino, Calif.  “Music was always the unsure road. Music was the risk. It involved so much faith, and I needed God to show me which path to take.”

So down on her knees Peters went, but what did she pray?

“I prayed that God would give me clarity. I prayed, ‘God you know logically I’m 17 years old, I have three songs, no touring experience, no understanding of the music business. God I trust that you would open the right doors. I really don’t want to this. I want to stay in school, so if you don’t open this door that’s OK.’  He was very clear in what I should do.”

The message she received was to forgo college and step into the Christian music world, but how did she know so clearly, especially after the “American Idol” judges nixed her while telling the California native to  go experience life –  kiss a boy  —  before even thinking of embarking on a music career?

After putting out a three-song demo, Peters went back to Nashville to meet with record labels. “And every single label made me an offer,” she said. “That was insane and unheard of. God answered my prayers.”

It all culminates on Tuesday, April 17, when Reunion Records releases her debut CD “I Choose Jesus,” which is finding radio airtime with the title track.  But it was not an easy road, as a child, Peters’ friends called her “Froggy” because of her voice. 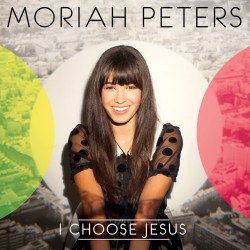 “I was terrible,” said Peters, 19. “I had this horrible voice. Here I was this little girl with this devilish froggy voice. It was abnormally low for a little girl. But it’s filled out. I have a unique voice, and I’m now comfortable with my manly froggy voice. It was funny, growing up in the church choir I always wanted to sing the male parts. I was insecure until I heard Jaci Velasquez. She has such a deep sultry voice, and I was so inspired. If she can sing like that, so can I.”

Along with taking her cue from Velasquez, Peters is influenced by Chaka Khan, Stevie Wonder and Steely Dan. Unusual influences for someone so young, but Peters father, a bass player, always had “funky, jazz music playing.”

During  her senior year in high school, Peters’ mom pushed her into auditioning for “American Idol,” and it was an experience that challenged her to be bold in her faith. “It challenged me, it tested me and it strengthened me,” she explained.

“I didn’t want to do it. I was afraid to audition, plus I wanted to  focus on academics. … It’s a couple of months of interviews and such before you even go before the celebrity judges. So they knew that I was a Christian and that I ran a Bible study in high school. I was open about my faith. …

“The celebrity panel said they liked my song and loved my voice but didn’t like my lifestyle.  They said, ‘Go out and kiss someone that will make you feel sexy,’  and that I had to get more life experiences.  And I’m not going to change who I am.

“As I was leaving I was thinking, God closed these doors, he’s opened them up to this point. I won’t question it.  I  knew that in my head, but in my heart I was frustrated. I had just spent five months preparing for auditions, and I could have been studying.”

As Peters was walking out of the auditions a man approached her and said he and his son were inspired by her stand in faith and ultimately introduced Peters to Wendi Foy, who sang with the trio Sierra. Foy took Peters under her wing by helping her with that three-song demo and introducing her to record labels.

Along with opening the door to the path to her first CD, God has opened the door to other ventures, including a role in a Veggie Tales movie – “Princess and the Pop Star — as the voice of Vanna Banana.

“That was a blast,” Peters said. “I grew up watching Veggie Tales, and when I heard about it I wanted to do it so badly that I slept with the songs on repeat on my earplugs so that I would learn the songs. …  I was so estatic when I got it. It was incredible. I went to the Big Idea (Entertainment) studios and I got to meet the people behind the characters. And found out how they make you a veggie. It was so cute.”

Being a Veggie is not the only “incredible” door that has opened for Peters. She is currently preparing for a tour with MercyMe after being the opening act on one of the legs of the band’s Rock and Worship Roadshow. But that slot was no cakewalk. That slot features an open arena with people milling around looking for seats and chatting it up.

“I learned a ton,” Peters said of the Rock and Worship Roadshow. “No. 1  is when I’m up on stage it’s important to first realize that you can’t communicate with everyone in the audience, especially in the opening slot.  So I prayed, ‘God even if it’s just one person, let me plant that seed. Let everything about me bring attention to you.’ If you start thinking it’s about me and my music you will get in real trouble. You get down on yourself if you mess up… It’s not about me it’s about the people who came and connecting the dots to God.”

Pretty amazing stuff for a 19-year-old who didn’t even want to venture into the world of professional music.