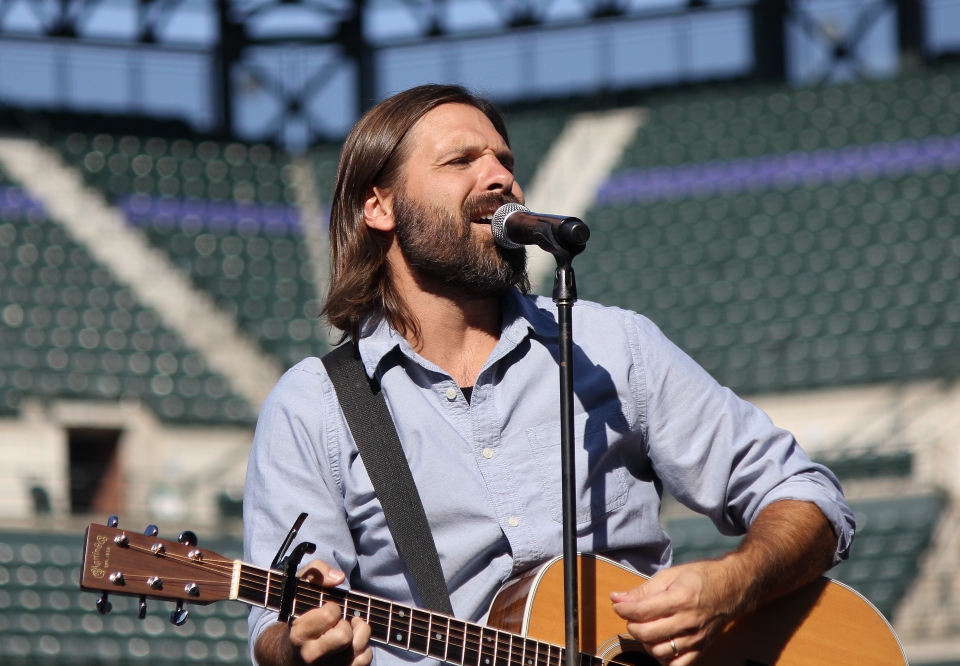 Third Day lead singer Mac Pow­ell is releas­ing a solo coun­try CD, but the band is not break­ing up. The band enter­tained a Faith Day crowd of 25,000 after a Rock­ies’ game in August. | Pho­tos by Eliza Marie Somers

With Third Day lead singer Mac Pow­ell set to release his first solo project, a self-titled coun­try CD, many fans might be won­der­ing if the four-time Gram­my-win­ning band is break­ing up. Well, don’t fret. Third Day is alive and well, and putting the fin­ish­ing touch­es on the group’s newest release, “Mir­a­cle.”

The band teamed with leg­endary rock pro­duc­er Bren­dan O’Brien, who has worked with Bruce Spring­steen, Pearl Jam, Stone Tem­ple Pilots and Denver’s The Fray, to cull a new vibe from the Atlanta-based band.

“I thought with us work­ing with Bren­dan O’Brien, this rock pro­duc­er, that (the new record) would be more of a rock sound,” Third Day gui­tarist Mark Lee explained, “And we are a rock band, so there are those kind of ele­ments, but I think Bren­dan real­ly helped pull out some more pop sen­si­bil­i­ties that we haven’t real­ly tapped into lot … more hooky back­ground vocals, key­boards and dif­fer­ent things like that. 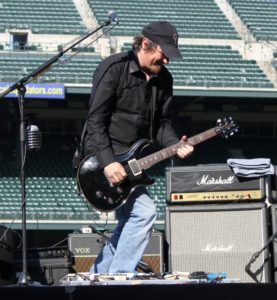 “It total­ly sounds like us, but there’s just some tex­tures that you haven’t heard from Third Day before. It’s very fresh sound­ing.”

With O’Brien’s help, fans will rec­og­nize Third Day in “Mir­a­cle,” but as bassist Tai Ander­son explains, it’s a new chap­ter to the band’s sto­ry as the guys try to keep things fresh.

“That’s the biggest thing, it doesn’t sound like any of our ear­li­er records,” Ander­son said, “and to nor­mal­ly pull that off peo­ple go to a gim­mick … it’s a coun­try record or it’s elec­tron­ic record. They are doing some­thing total­ly out­side their genre. For us, we’re play­ing our instru­ments, we’re being Third Day, but we made a record that sounds fresh. And it doesn’t sound like we are cov­er­ing ear­li­er Third Day music.

“I think the longer you are around as a band that it’s hard­er to do that. Every­thing becomes… like it sounds like that song. This is some­thing new. We are start­ing a whole new chap­ter. It’s def­i­nite­ly fun.

“This is the first time Bren­dan has worked with a Chris­t­ian band, and I’m real­ly excit­ed,” Ander­son con­tin­ued. “I think he pushed us. We have music that speaks to peo­ple of faith, but also does it in a way that any­body can lis­ten to it and get where we are com­ing from. I think it will be real well received out­side the walls of the church as well.”

And break­ing down some of those walls might just be what pro­pels Third Day into the realm that Switch­foot and The Fray have crossed.

“Some­times as Chris­tians we can be guilty of speak­ing our own lan­guage. It’s like being like a coun­try club,” Ander­son said. “It’s like that Bible verse: Let your light shine. I think that it’s impor­tant that we are out in the com­mu­ni­ty. With this band we see it when it’s hard times and in tragedy … as Den­ver well knows. Faith is such a heal­ing thing. It’s some­thing that peo­ple real­ly rely on. It’s impor­tant to be there for the com­mu­ni­ty show­ing, ‘We care about you. We are all in this togeth­er.’”

While his band­mates take a tour­ing break, Pow­ell will embark on a new chap­ter while break­ing down some walls with a short 15-date tour to pro­mote his CD. (The first date is Sept 14 at Joe’s Bar in Chica­go and end­ing in Novem­ber right around the time of the release of “Mir­a­cle.”)

“With Mac, he’s in a sea­son where he want­ed to have some fun and play some music that didn’t fit with Third Day,” Ander­son said. “Mac is such a sports guy, for him it’s like a chal­lenge. Can I do this? Can I go cou­ple of rounds in this oth­er world? We are real­ly proud of Mac. It’s real­ly hard to just go out and make a record. He has writ­ten all these song and they are real­ly great songs, but I don’t think any of them would fit on a Third Day record, because they don’t fall under our mis­sion state­ment. But they are all great, fun songs. He’s going to have a blast out there. It’s a both an  ‘and sit­u­a­tion’ not an either/or. Third Day is going strong, and Mac is doing his thing.”
‑30-

2 Responses to Third Day gets jolt with Brendan O’Brien, ‘Miracle’