Joel Osteen’s Night of Hope opens with a ren­di­tion of the nation­al anthem. | Pho­to by Eliza Marie somers

That was the cen­tral theme of Joel Osteen’s mes­sage when he was in Den­ver this sum­mer for A Night of Hope at the Pep­si Cen­ter –Don’t set­tle for good enough.

“Good enough” is only a “C” – that’s just aver­age, but God did not put you here to live a “C” life. God has plans for you, and they are “A” plans. You don’t have to scour­er the Bible to find that God wants you to live an abun­dant life. But it’s not going to fall from the sky like man­na, you have to work for it and not set­tle for “C” or get too com­fort­able with “C.” (Inter­est­ing how com­fort starts with a C.) That’s a quick syn­op­sis of Osteen’s mes­sage. 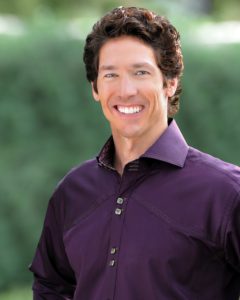 Joel Osteen says set­tling for C’s in life is not what God has planned for you. | Pho­to cour­tesy of Joel Osteen Min­i­s­tires

John 10:10: The thief comes only to steal, kill and destroy. I came that they may have and enjoy life and have it in abun­dance. – Ampli­fied Bible

“The most pow­er­ful source in the uni­verse is with you,” Osteen said. “Stir up your great­ness.”

Osteen cit­ed the sto­ry of Abram and how his father, Ter­ah, stopped short of the land of Canaan and set­tled in Haran. (Gen­e­sis 11:31) Ter­ah set­tled for com­fort. He did not want to keep on going to the promised land. He was tired. He had lots of ani­mals and fam­i­ly to keep mov­ing. God had great plans for Abram’s father, but Ter­ah set­tled for a “C,” because it was too hard to keep striv­ing for what God had in store for him. What was promised to Ter­ah went to his son Abram, because Abram kept striv­ing for that “A” life.

Many of us have set­tled for a “C” and “good enough.” Osteen wants to set a fire to your pas­sion by encour­ag­ing you to strive for great­ness, not just aver­age. “God has plant­ed seeds of great­ness in us. He cre­at­ed us to excel … to suc­ceed in life,” Osteen said.

It’s time to change your atti­tude and take on this mot­to: I’ve let good enough be good enough long enough.

Osteen cit­ed Deuteron­o­my 1:6: “You have stayed long enough on this moun­tain.” It’s time to pull up stakes and head toward your promise land. Start dream­ing again, start striv­ing… God has it all fig­ured out. He will make a way where you don’t see a way. He will con­nect you with the right peo­ple. He will open doors for you.

But– and it’s a big but – you have to get out of your own way. If you think you will nev­er over­come that addic­tion, or meet the right per­son, or gained that big pro­mo­tion, you will nev­er suc­ceed. It’s what Joyce Mey­er calls “stinkin’ thinkin’.” If you don’t think you will be suc­cess­ful, you will get stuck where you are.

Get rid of that neg­a­tive men­tal­i­ty and make room in your think­ing for God’s promise. God has an “A” in store for you if you don’t set­tle for a “C.” And don’t get com­fort­able with a “B” life either, just image what God has in store in you strive for his promis­es.

You can watch Osteen’s June 24 mes­sage from this Lake­wood Church in Hous­ton on his web­site.

A Night of Hope also includes music min­istry, a mes­sage from Osteen’s wife, Vic­to­ria, and his moth­er, who has over­come can­cer.